Here is just a sample of the airbag claims our office has handled:

We successfully resolved a case for a woman who sustained severe injuries to her skull after she was injured when a piece of metal shot out of her airbag and struck her in the forehead.

Airbag attorney Jason Turchin represented a car accident victim in Miami who was stabbed in the leg by a piece of metal that shot out of his airbag following a minor car accident.

Broken Bones in Wrist from Excessive Force
Jason represented a man whose wrist bones were crushed after his airbag deployed with so much force that it broke his bones. He required surgery to repair his hand.

Severe Burns from Exploding Airbag
One of our clients was allegedly injured when the airbag in her Honda vehicle exploded, shooting hot gas or air and pieces of metal at her. She is left with scars on her wrist.

Honda Victim Burned By Exploding Airbag Unit
Our airbag lawyers represented a woman in Ft. Lauderdale who was burned by a piece of her airbag that flew out of the dashboard and landed on her leg.

Driver's Shirt Caught on Fire from Airbag
Our client was severely burned after his airbag deployed with so much force that it caused his shirt to catch on fire. He underwent surgery to remove burned, scarred skin.

Car Driver's Wrists Broken from Airbag
One of our firm's clients was injured when her airbag deployed with so much power that it broke the bones in her wrists, requiring surgery.

Jason Turchin is a member of many state and federal bars, including:

Our airbag attorneys have handled more airbag injury claims than most other lawyers in the entire United States.

We handled one of the first known airbag rupture cases before any class action was ever filed. Since then, we've helped many other airbag injury victims 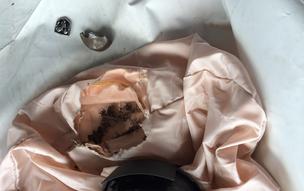 We are victim's rights attorneys who fight for those injured or killed as a result of someone else's negligence or reckless conduct.

Jason Turchin has handled more than 5,500 accident and injury cases. We pride ourselves in fighting for the rights of our clients and getting them the answers and compensation they deserve.

Jason is a member of the Super Lawyers Rising Stars list, AV rated by Martindale Hubbell, voted Best Attorney in Weston, A+ rated by the BBB, member of the Million Dollar Advocates Forum, lifetime member of Best Attorneys of America list, and is a #1 best selling published author on car accident claims.

pursue claims for airbag injury claims throughout the US.

Our office has already resolved many airbag injury claims against some of the major automobile manufacturers.

Let our experience help with your airbag injury case in Florida, Texas, Georgia, or throughout the US.